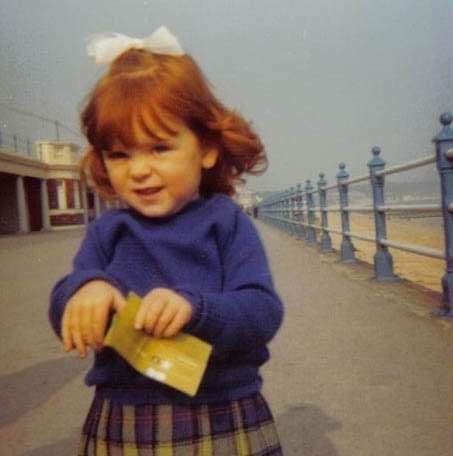 “So, ok, I’m ginger! There, I said it. I can deal with that. However, a test of my strength of (sensitive, ginger) character hit hard when I also realised I was gay. Come on! How unfair did this seem at the time?“

I was born cursed.

“Cursed with what?” I hear you ask.

Well, let me tell you. I was born cursed with the ginger gene! To many of you reading this now, you may feel this is a dramatic over-exaggeration of my hair colour. Some of you may be ‘ginger’ and love it. However, growing up ginger in the 70s was no easy task.

When I say ‘ginger’ I mean ginger. Not ‘Strawberry Blonde’, not ‘sandy,’ but actual ORANGE. On top of this, there were 3 of us. Me, my younger sister and my older brother. All orange!

As kids, we would be out and about with our parents, shopping, on holiday, whatever. Wherever we went we would be stared at. I mean, literally, people would stop and stare at the 3 of us. In today’s context we would be chart-topping superstars as part of ‘The Greatest Showman’ soundtrack; we could all sing!

It wasn’t just the staring either. People would touch us. Touch our hair. Without permission. I’ve heard pregnant women say similar about strangers thinking they have the right to touch the ‘baby belly’; people they don’t know walking up to them and stroking their bump even in this day and age.

A colleague of mine has recently had cancer and lost all of her hair. She said that one of the most uncomfortable and almost distressing parts was when her hair began to grow back and people would stroke her ‘stubble.’ Generally people she knew, but some outside of the family.

I suppose the ‘Curse of Ginger’ could have caused me a lot more trouble. There were not so many gingers about in those days and many of our ‘community’ were bullied for their hair colour. On reflection, the targets of bullying were mainly boys with a ginger chip on their shoulder, so they would attack first in order to defend themselves. This did not usually turn out well.

My brother and I were both quite placid and easy going, so there was no real need for us to be singled out and bullied for our hair colour. I mean yes, there was the usual name calling—‘Duracell,’ ‘Carrot top,’ ‘Ginger nut,’ etc.—but I was never bothered by it. My sister was a totally different character, so nobody in their right mind was going to have a pop at her!

An observation I have made about the ‘Ginger Curse’ is that, generally, if you are ginger, you hate it; if you are not ginger, you love it and want to be ginger.

Redheads (a polite way to say ‘Ginger’) are apparently the rarest ‘breed’ of the human population with only between 1 and 2 per cent natural gingers. Research has been taking place for years into the ginger gene. In the year 2000 it was discovered that the ‘mutation’ of a particular gene (MC1R/MCIR) causes gingerness and its unique characteristics.

Here we go again! Such negative connotations into the ginger gene—mutation! Come on! What about ‘Transformation,’ ‘Revolution,’ ‘Metamorphosis?’ These are all far more complimentary than ‘Mutation’. As it is, our gingerness causes us to be more sensitive than the rest of the world’s population (scientifically only physically more sensitive, but who knows, it could have an effect on our mental and emotional sensitivity too?)

Over sensitivity to temperature changes is a definite physical symptom I suffer as a ginger. In the winter, one minute I’m fine and within a millisecond I’m shivering like a Chihuahua being forced to walk in the rain. As a ginger, I am more sensitive to pain which is why, if you visit my home, you will find enough painkillers to stock a village pharmacy. During major operations as a child I required 20 per cent more anaesthetic than the kid in the next bed and I was far more susceptible to bleeding out as blood doesn’t clot as quickly. (I remember all these details from the doctors, nurses and surgeons from my weeks at a time in hospital.)

So, ok, I’m ginger! There, I said it. I can deal with that. However, a test of my strength of (sensitive, ginger) character hit hard when I also realised I was gay. Come on! How unfair did this seem at the time? I knew I was definitely not straight when I was 15 but it wasn’t until I began my teaching career in the early 90’s amid Section 28 that I knew I was most definitely gay.

My first true love was a senior teacher (13 years older than me) and we were together for 9 and half years. However, for all of that time, due to Section 28, due to her not wanting to upset her elderly parents, due to her not wanting to attract attention, due to parents of pupils making derogatory comments following rumours around the village where we lived, we behaved outside the home as ‘just good friends’. This most definitely took its toll on our relationship and I ended it, feeling guilty. I left with nothing.

As if this wasn’t/isn’t enough, I have battled a severe anxiety disorder which presents (when unmedicated) in a range of ways: at worst, panic attacks so debilitating I can’t function enough to even get out of bed to take a shower; at best, I have extremely tidy, alphabetically-rearranged, colour-coordinated kitchen cupboards through an attack of OCD.

I am aware of an addictive personality which is not always a negative attribute (alcohol, food, self-harm), it can also have positive influences on my life. For example, during the recent lockdown, my obsession has been with maths! For me, this has been fabulous because, as a primary-trained, non-specialist maths teacher teaching GCSE maths to excluded teenagers, I feel that, at last, I am ahead of the game.

So, the ginger curse could have been much worse for me. I haven’t ever embraced it. I have yearned for my hair to turn naturally grey for years but it’s as stubborn as I am. I am currently rocking my natural colour, which is certainly less orange than it was when I was a child, and there are definite sprinkles of grey in there, so things are looking good.

In the grand scheme of things, I am in good health, have an amazing career and a loving, generous, kind partner. Curse of Ginger? I’ve got this.

Janine was born in Leeds in 1970 to working-class parents, the middle of 3 children. She graduated from Teacher Training College in Lincoln in 1993 and has taught in Norfolk and Suffolk ever since. janinenorris70@wordpress.com

Read all of Janine’s Random Thoughts: This is not a Diary Posts

Read more blogs by incredible LGBTQ+ Women Like Us.

I’ve been hated for my skin colour, for my sexuality, for my mental health, things I can’t change. People are going to hate me whatever, so I might as well be who I am. I don’t care what people think anymore … Read More

“Growing up (sort of) has taught me that mates are mates, gay or straight, and that being an unbearable arsehole will leave you alone very quickly.” Read More